Is your Suzuki Jimny safe enough for your baby?

That depends if it is a used or new car, and what safety features a car has to influence the car crash ratings.

The Monash University Accident Research Centre analysed crash statistics, from over 7 million police-reported road crashes in New Zealand and Australia, between 1996 and 2016.

The Used Car Safety Ratings (UCSR) reflect the overall car crash safety performance, so in order to score well the car had to protect both the occupants of the car as well as minimal injury to other drivers, pedestrians, cyclists - basically everyone involved in the crash.

The data is published as part of a used car buying guide (Used Car Safety Ratings (UCSR) Buyer's Guide) to help people decide on their options.

Suzuki Jimny has only ever managed to score Poor in that time (see below for the latest brochure exerpt).

For further details on more Suzuki 4WD and other brand ratings in the UCSR car buying guide, go to How Safe Is Your Car. 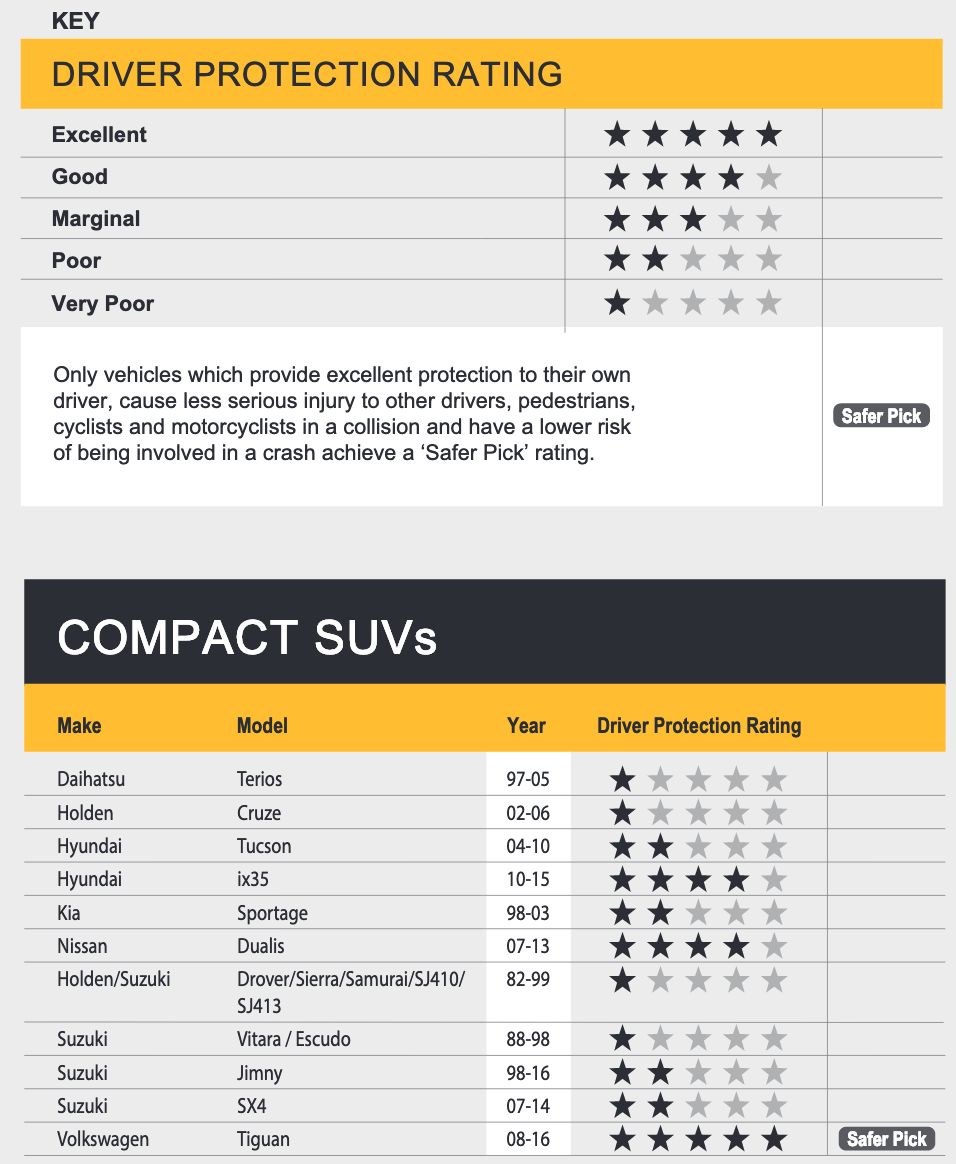 It's suggested that the following features will help a car avoid a crash:

And the following features will reduce injury and death:

The latest USCR website suggests looking for the following features to include in your car (and the list is not exhaustive):

Is the NEW Suzuki Jimny safe enough for your baby?

Of course, a new car is generally safer than a used car (largely due to the additions of safety features, according to the UCSR car buying guide).
According to the Euro New Car Assessment Program (Euro NCAP) the latest 2019 Jimny has standard

Suzuki has stated previously that the Jimny has crumple zones with a high strength steel frame to disperse the impact away from the cabin, and side impact protection beams.  Their website currently states that they have the following:

The Japanese New Car Assessment Program (JNCAP) JANCAP Suzuki Jimny test (2005 model) over a decade ago gave the ratings 5 out of 6 stars for safety during the collision for the drivers seat, and 6 out of 6 stars for the front passenger seat. Rear seats were not tested.
Pedestrian head protection on the bonnet of the Jimny was rated only 1 star out of 5!

The latest 2018 Australasia NCAP (ANCAP) and Euro NCAP tests gave an overall rating of 3 stars out of 5 for the latest Jimny model.  Safety standards have gotten higher and better since the 2005 JNCAP test.

Unfortunately the new model Jimny only scores one extra star more than the used model in the USCR ratings (although they are different tests and not easily compared we will nonetheless compare them as a general guide).

So what is the moral of the story?

Well, a new Jimny is safer than an old one, however please use the safety information linked above on this page to USCR, ANCAP and Euro NCAP to make the best decision for your family.  These websites show you other choices you can make.


Is a new Jimny the safest car you can afford? As with any purchase, buyer beware!

Read about our car crash...